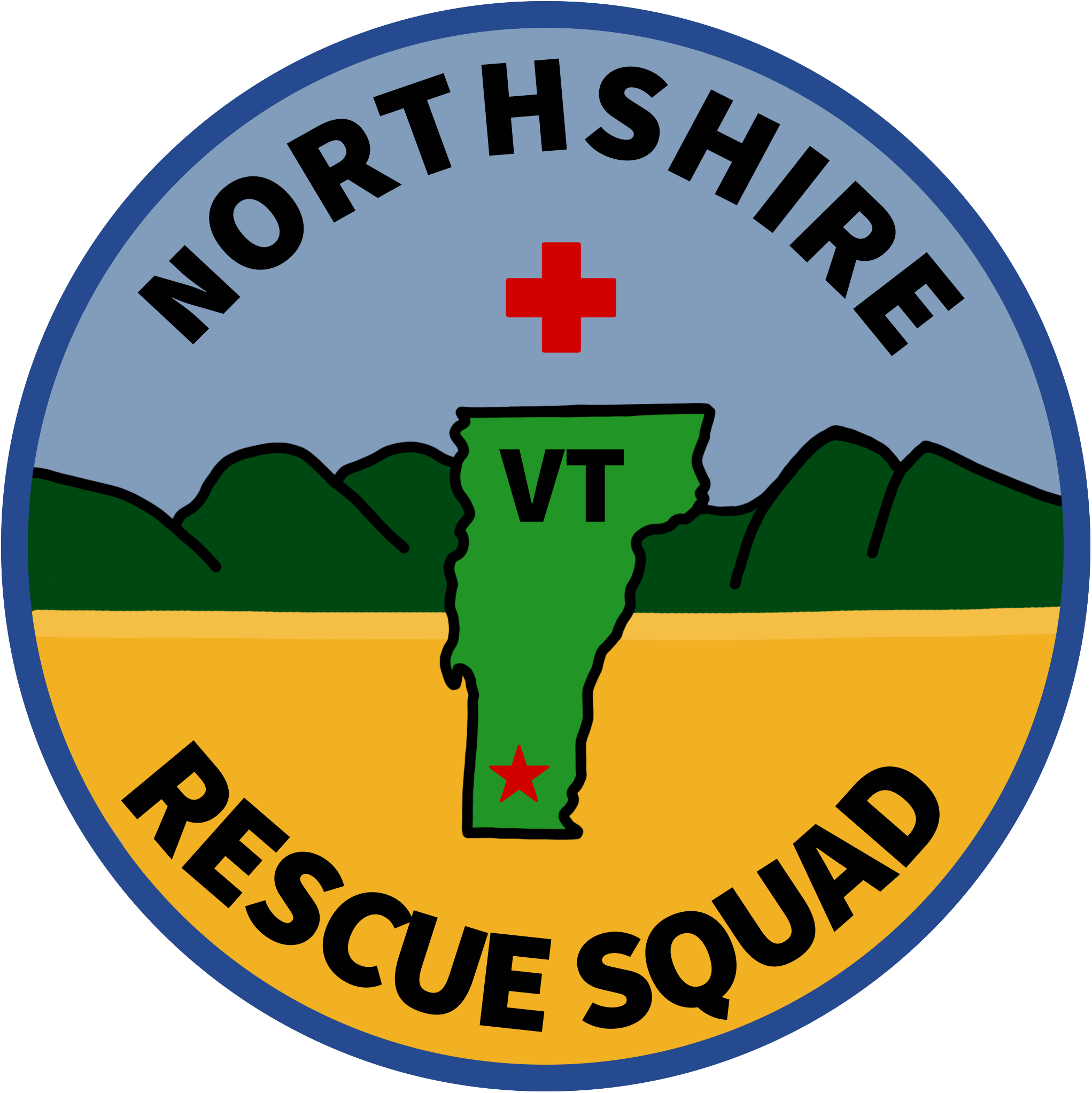 In the spring of 1964, through the generous donation of Mrs. E. L. Grondahl, of Dorset, a Cadillac ambulance was accepted. The purpose of the gift was to supplement the present service, then rendered by Brewster’s Funeral Service and to supply ambulance service free of charge to those who were unable to pay. This service was to be used by the residents of the Northshire towns and for anyone involved in any emergency situation within the area. It is with this gift that Manchester Rescue Squad (MRS) came into being.  The squad was recently renamed the Northshire Rescue Squad to better reflect its service area.

In September of the same year a fully equipped 1964 Cadillac ambulance was delivered by the Superior Coach Company. The Squad however did not operate until early November for they had not finished their Red Cross Advanced First Aid Training. In the first full year of operations 85 calls were answered and 5,856 miles driven.

For eleven months our ambulance was initially housed at Leo’s Motors on the showroom floor, the Jeep dealership which was where Stewart’s is now .  In 1965 the Manchester Fire Fighter’s Association built a new firehouse and vacated the old building at the top of Center Hill by Adam’s Memorial Park. The Rescue Squad then made arrangements with the town to use this building for the housing of our ambulance.

In 1971 MRS moved to a building owned by the squad that was behind the old town hall and fire department (behind the row of stores between Mac’s convenience Store and Friendly Restaurant) . This building was built and maintained with donations of time, money and materials by members of the squad and community. We remained there until 1997 when we turned our building over to the town and in exchange moved in with the Police and Fire Departments in the new Manchester Public Safety Building on Route 7A North, our current home.

Membership of MRS initially was limited to 24 members, with a waiting list of prospective members, who were on call every eighth night, covered one weekend day shift a month and answered tone outs for weekday day calls.  Over the years membership drives were able to provide the staff necessary to cover our calls and dedicated volunteers spent countless hours of their free time in training for certification and subsequently seeking increased levels of knowledge and skills.

In 1989 and again in 1999 the Manchester Rescue Squad was recognized by the Vermont Department of Emergency Medical Services and our peers with the “Ambulance Service of the Year Award”.  Our commitment to excellence of care and advancement of our organization has been a hallmark of MRS.  We were one of the first squads to seek training in defibrillation and in close association with the doctors of the Northshire Medical Associates we provided cutting edge opportunities for thrombolitics in the field.

Time changes all things, and as the number of calls continued to grow with the populations of the towns we serve, we continued to struggle to provide crews especially for daytime calls.  Impacting this also is the two and one-half to three hours we spend on each call when a patient is transported to a hospital.  In today’s society a business person can no longer close the doors and leave to volunteer, which was quite acceptable in the past.

The requirements for certifications of members also increased causing a decrease in the number of people able to commit to volunteering their time. Therefore in 1995 we were forced to hire daytime personnel to handle the ever increasing number of day calls that volunteers could not respond to due to work constraints.  Seeing this as an opportunity to provide a higher level of care to our patients, in 1998 NRS explored the possibility of providing Paramedic services to the community and by the end of 2000 that came to fruition. With a goal of providing this advanced level care around the clock, we changed the face of emergency medical services for our coverage area.  Paramedics are much more highly trained than our volunteers and thus can provide a significantly higher level of care in the field. With hospitals minimally 25 -30 minutes away we saw this as a tremendous step forward.

Today we provide emergency medical services to the same coverage area of  Manchester, Dorset, East Dorset, Mt. Tabor, Danby and parts of Winhall with 24/7 paramedic coverage.  In 2019 we responded to 1,252 calls and traveled 50,864 miles.  We work in tandem with the area fire and police departments on many occasions and value their team work and dependable assistance.  While EMS District #12 (out of SVMC) is our “home” district, due to our location and service area, we also operate as a voting member of EMS District #10 (out of Rutland).  This dual role allows us the opportunity to influence decisions for each area and provides a direct link to the VT State EMS Office.

Our training center serves as an ideal place for our monthly training sessions, First Responder, EMT (Emergency Medical Technician), associated courses and meetings.  We continue to serve as an American Heart Association Training Center providing CPR Courses to the public at least monthly.

With a minimal shift of 9 hours, our personnel are dedicated, caring individuals who reside in this building 24 hours per day, each and every day of the year. After nearly 50 years of service the Northshire Rescue Squad, is proud to continue to place patient care first and foremost while offering reliable service to our communities.

Established in 1964 by a dedicated group of volunteers and a generous ambulance donation from a Dorset resident.